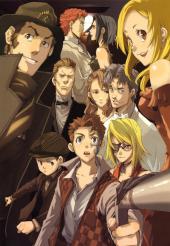 In the year 1711, a group of alchemists are granted an elixir of immortality, with the stipulation that they must kill each other until there can be only one. The now-immortal group unanimously decides it wasn't worth it and destroy the elixir; but one of them, Slizard Quates, starts to kill off his fellow immortals. To reduce the risk of Quates tracking them all down, the group separates and goes their separate ways. Neither of them crosses paths again till 1930, Manhattan, when Quates manages to create a new elixir of immortality. However, he loses it and it ends up going around town, taken to be a bottle of alcohol and unknowingly drunk by many residents. The drinkers of this new elixir include Isaac and Miria, an eccentric pair of thieves; the Gandor brothers, a Mafia family; and their associates in the Camorra, the Martillos (who employ some of the original immortals). Now, not only are a new group of immortals created, but the simmering criminal underworld is about to explode.