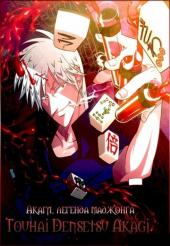 While mahjong is a game that is often played with family and friends, it is also a game that is played in the darkest corners of society. Nangou is a compulsive gambler who has accumulated debt over three million yen. In a last ditch attempt to clear his record, he decides to wager his life on a game of mahjong with the mafia. Unfortunately, as the game progresses, Nangou only moves further from the prize and closer to death.
When all hope seems lost, the game parlor is suddenly intruded upon by Shigeru Akagi, a young boy on the run from the police. Desperate to turn the game around, Nangou hands the game over to Akagi after teaching him a few of the rules. The mafia can only smirk as Akagi sits down to play. However, they soon come to learn that Akagi is a natural born gambler. An imposing figure who does not fear death. One who is destined to become a legend.
[Written by MAL Rewrite]