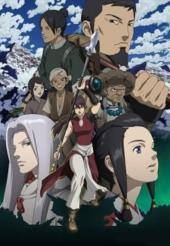 At a time when the balance of nature still held the civilizations of mankind in thrall, a single drought could spell the end of a society and doom its inhabitants to piteous deaths. Prince Chagum has been imbued with the power to stave off the drought and bring new life to his empire. However, this is a suspicious time, and he is accused of possession by an evil spirit.

Court advisors only see one solution. Chagum must be put to death by his own father's hand. His salvation is in the form of Balsa, a spear woman and mercenary from Kanbal, the kingdom across the mountains. Her skills are legendary, and although reluctant, she is held by a mysterious vow to save eight souls before she dies. Can she fend off an entire empire and make Chagum her eighth soul?