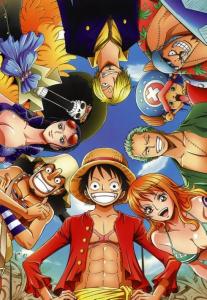 Before he was executed, the legendary Pirate King Gold Roger revealed that he had hidden the treasure One Piece somewhere in the Grand Line. Now, many pirates are off looking for this legendary treasure to claim the title Pirate King. One pirate, Monkey D. Luffy, is a boy who had eaten the Devil's Fruit and gained rubber powers. Now he and his crew are off to find the One Piece, while battling enemies and making new friends along the way.