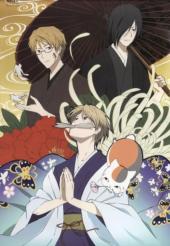 Takashi Natsume sees spirits, and with the help of his lazy and sake-guzzling bodyguard Nyanko-sensei he returns to spirits their names that were stolen by his grandmother Reiko Natsume. Not all of the spirits are peaceful though, and he often fights to keep himself and his family and friends safe while at the same time fighting the loneliness that plagued him before he found his home.