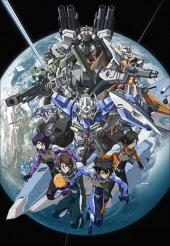 It is the year A.D. 2307. Fossil fuels on Earth have been depleted entirely, with mankind turning to the next available power source: solar energy. During this time, 3 orbital elevators with solar power generation systems are built, each under control by the Union (formerly United States of America), the Human Reformist Alliance (Russia, China and India) and the AEU (Europe). However, not all countries are able to enjoy the benefits of this system, leading to widespread resentment and war. Arising out of the conflict, a mysterious non-profit military organization known as Celestial Being appears, dedicated to end all warfare using Mobile Suits called Gundam. This begins the stories of Gundam Meisters (pilots) Setsuna F. Seiei, Lockon Stratos, Allelujah Haptism and Tieria Erde as they are thrown into conflict between the 3 superpowers and the other various factions.
(Source: ANN)