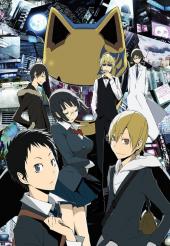 Mikado Ryūgamine is a boy who longs for the exciting life of the big city. At the invitation of his childhood friend Masaomi Kida, he transfers to a school in Ikebukuro and is soon warned about people he doesn't want to cross in the city: a violent and superhumanly strong man, Shizuo Heiwajima, an information broker named Izaya Orihara, and a mysterious gang known as "The Dollars". Mikado also witnesses a local legend called the "Black Rider", who rides around Ikebukuro on a black bike and is also rumored to have no head under its helmet. From then on, the story follows several different characters, how their lives intersect and the many incidents that eventually push Ikebukuro to its limits.